You never considered yourself a sports fan.

You were an aesthete. You lived for art and music and philosophical conversations about existential dilemmas. You ran with a pack of weirdoes and misfits and thought that by your late twenties you’d be sipping espresso at an outdoor café in Paris and working on your novel in the late afternoon hours, before dinner.

Only it didn’t happen.

The misfits and weirdoes began drinking too much. The conversations got slower and more repetitive. You memorized the wood paneling of certain bars and wondered when you’d make that glorious escape to the imagined future where these dying people couldn’t bring you down anymore. Some of them left the bars to get jobs and began talking about things like farmer’s markets. They began to know the intricacies of different wines and the locations of the best restaurants. They had children and began wearing comfortable footwear.

And so you turn, inexplicably, to sports radio.

Here it is, your own little slide into normalcy. Your sacrifice to the gods of aging. Your slice of the mundane. You won’t attend games or even watch them on television. You won’t join fantasy leagues or participate in internet chat forums. Too much. No, this is easy. It’s yours, your secret and you like it that way.

Stop at the bodega on your way home. Bag of pretzel chips, hummus, Epsom salts, a small bottle of San Pellegrino and Advil PM. You’re self-conscious about the order, as it reeks of sadness. The revelers on line behind you are stocking up for the party. They are loud and young and dumb. If they had any cognizance beyond their own immediate desires, they might notice you and your sad man’s grab bag. But don’t worry, they don’t. They don’t even see you. You’re invisible. But it’s fine, be in the kitchen soon where the radio reception is the best. Funny how you never used to spend much time in there. Back in the beginning the two of you only left the bed to get more cigarettes.

But you’ve made your peace with it. “Kitchen is the new bedroom” you think, and it sounds like a rejected ad campaign and that makes you smile. A grimace, you suppose.

Pass the bar. Don’t look in the windows. What do you think you’ll see? Or, rather, who?

Settle in. There’s Robin Lundberg on the overnight. 2 a.m. to 6 a.m., the slot for the up-and-comer hosts. They are the best hosts because they have more to prove, engaging with the callers, fearful of alienating the audience they’re carefully trying to build so they can one day move to daylight hours where they can yell at their audience wantonly. You won’t catch them as much when that time comes, but don’t worry, someone will take their place. You’ll make new friends.

Light a cigarette and stare out the kitchen window that looks out onto the Brooklyn Queens Expressway. The squealing traffic and smeared lights.

Will ‘Melo actually hurt the Knicks in the playoffs? What does a scoring title really mean anyway? Let’s take some calls. Jeff from Staten Island brings up Bernard King and Dominique Wilkins and how, while they put up big numbers, you never really hear them in conversations about the All Time Greats. And you think, “It’s true, you never hear about Dominique anymore,” and you ignore the sink full of dishes and the overflowing ashtray and the fact that she said she’d be home three hours ago. All Time Greats.

What a great way to kill time while it all falls apart around you.

In the past, when this happened, you were still young and filled with the type of indomitable spirit that could survive a thousand break-ups, so you could just listen to depressing songs and be gloriously melancholy. It was like smoking, a good look for a young romantic but deadly past thirty-five. Back then, you were sad and you heard a sad song and it made you feel less alone.

But then it was an echo chamber. A refracted sadness. You started to think about the guy singing the song. How sad is he, really? You became friends with men who sang sad songs and they didn’t seem so sad, actually. Businesslike. Did Dylan even really care about that Girl from the North Country? Losing your love, you listened to songs of lost love. How low.

Enough. Let’s listen to voices other than those in your head. To angry voices like Eddie from Staten Island. Or meek ones like Tim from Cutchogue. Matt from Brooklyn in the car. Let them tell you about Tiger’s penalty at the Masters and without knowing it that you are not alone in your desire for diversion. It’s your escapist pre-occupation. Chain the Camel and get comfortable. This is home now.

Is it because Mike and the Mad Dog filled the kitchen of your Long Island home, morning, noon and night and on every car trip from the 7-11 to the Jersey Shore? Maybe. The two were timeless and constant, back then. Now they’re a vestige of a bygone era for New York sports — like John Starks’ “The Dunk” or LJ’s four point play or Bobby Bonilla and Vince Coleman’s fireworks episode. You’re missing your youth, that’s all. The youth you had before you knew what youth was, when Reggie killed the Knicks and MJ killed everyone and you knew without knowing that you would be great someday, like them, in your own way, radiant, unstoppable, eternal. That was then.

As time goes on, the new habit gets more pronounced. It’s not so new. It just is. You’re listening to the radio while watching highlights from ESPN, the Book of Basketball somewhere within your field of vision. Maybe a second bath. A third Advil PM. Maybe she’ll leave before the bar closes tonight. Maybe the Celtics will shock the Knicks in the first round. Maybe Jeff Green is finally justifying the ‘Perk’ trade. Maybe Kobe, if anyone, can come back from this Achilles injury. If not him, then who?

Then, maybe you’ll be like Kobe. You’ll come back too. You’ll shock the world with a return so glorious the experts are dumbfounded. In this midnight daydream, you never hated Kobe. He’s not a person here, he’s a vessel. You hope for his comeback, you crave it. Because you want to believe that if you work hard, you’ll will succeed too. You’re listening to your own resurrection.

A commercial break interrupts your thoughts. This Flo from Progressive Insurance person has become sort of charming in her own desperate way; a Stockholm syndrome of your proximity. Quicken Loans is telling you they receive “a lot of tweets from customers that sound like this,” and then recite questions well over the 140-character limit. Hey, there’s Walt “Clyde” Frazier talking about urinary dysfunction. Don’t ask for whom the bell tolls, Clyde…

They’re back now. Kobe again. The injury D’Antoni’s fault. The coach has a responsibility to rest a player, even if it’s an alpha dog who begs to play, right? Bryant was apparently second in minutes played. 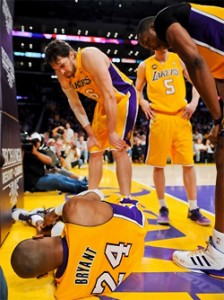 Who knows? You don’t retain much when you listen. You miss a lot of the details. What’s the point? Because apparently there’s no correlation between Achilles injuries and exhaustion, though it seems like they should have rested him. So many games. Not so young anymore. The debate continues. Maybe this is the coach’s fault. It would be nice to find fault instead of “we’re both to blame” or “These things happen.” You want a smoking gun. Stats are real, like evidence. You try gathering your own evidence but when she gets home, bold with drink, your little stats turn to gossamer, discarded with a few eye rolls and a loud protestation. You don’t want to wake the neighbors again, so you head back to the kitchen to hear about Kobe, who’s suddenly old school, serious, competitive, dedicated to winning. The brash kid became the wily veteran.

You let your mind wander a little more and all of a sudden, you want Jordan to come back and beat LeBron. Fuck it. Why not? Jordan’s 50th birthday fueled rumors of him trying to get back to his playing weight. How glorious it would be to watch him win again. The greatness of your youth will impose its truth on a new, fearsome reality. Things to be the way they were once, when everything made sense. There was no truth because your dreams were the only truth. You’re pining for a future that never really was. And this probably means that you’re getting old.

Maybe that’s why you like the radio so much. It sounds old too. It never changes, though it changes every day. You go well together.

J.G. Sullivan is a writer living in Brooklyn.